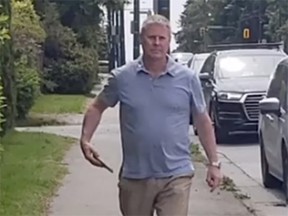 A Vancouver realtor who walked down Granville Street while being filmed and removed posters seeking information on an Indigenous woman whose body was found in a Shaughnessy property is no longer with Macdonald Realty.

Last Saturday, a group of 100 people — including Chelsea Poorman’s family — walked from the Shaughnessy location where her body was found to Granville and Davie Streets where she was last seen on Sept. 6, 2020.

The rally was held to raise awareness of the case, which the Vancouver Police Department has deemed not suspicious. Poorman’s body was found by a building contractor on April 23, 2022.

Angela MacDougall, executive director of the Battered Women’s Service Society, said that as the group was walking down Granville Street at around 36th Avenue a man and woman appeared on the sidewalk.

She said the man started to tear down posters the group was putting up that had two photos of Poorman and a question “what happened to Chelsea Poorman?”

“He was very angry and aggressively walking down the street and tearing down the posters,” MacDougall said.

“Which is unbelievable if you think about it. We are talking about a dead woman.”

MacDougall said the video was posted that day, and soon after the person was identified as Randy Vogel from Macdonald Realty.

“People that are connected in Shaughnessy and in real estate were appalled and it didn’t take long before the whole network of realtors and people who are concerned about Indigenous women going missing and who have privilege identified him,” she said.

On Monday, Macdonald Realty confirmed that the person in the video was no longer working with the organization.

Randy Vogel and his wife and business partner Pam have a property on Granville Street near where the posters were torn down.

Calls to Vogel’s home and business numbers were not returned.

Poorman’s family members also feel frustration and anger over how Chelsea’s case was handled by the Vancouver police: They believe her disappearance 20 months ago was not publicized quickly enough, they want to know exactly what officers did to try to find her during that time, and they don’t understand why police immediately declared her death “not suspicious” when so many details remain unknown.

A half-dozen Indigenous organizations have expressed outrage at how quickly Vancouver police decided Poorman’s death was free of suspicion, saying the move was “emblematic of the absolute crisis of missing and murdered Indigenous women and girls” across Canada — a crisis that was examined in both a 2012 provincial inquiry and a more recent national public inquiry, which collectively brought hundreds of recommendations for change.

— with files from Lori Culbert

More news, fewer ads: Our in-depth journalism is possible thanks to the support of our subscribers. For just $3.50 per week, you can get unlimited, ad-lite access to The Vancouver Sun, The Province, National Post and 13 other Canadian news sites. Support us by subscribing today: The Vancouver Sun | The Province.

Sign up to receive daily headline news from the Vancouver Sun, a division of Postmedia Network Inc.

Thanks for signing up!

A welcome email is on its way. If you don’t see it, please check your junk folder.

The next issue of Vancouver Sun Headline News will soon be in your inbox.

We encountered an issue signing you up. Please try again

Previous Post Housing market slowdown continues, with average selling price down 13% since February
Next Post Commercial rent prices are rising, and many small businesses are finding it hard to keep up